As promised in my previous post I have an update for you on my experiments with making vegan milk including a recipe for my preferred oat milk/cream and a couple of ideas and recipes on how to use it.

Unfortunately cutting out milk hasn’t had any noticeable effect on my eczema but I’ve continued making this milk every day anyway as I really like it. As mentioned in my previous post my main criteria for for success is whether or not the milk makes a good chai as that is mostly what I use it for, I’m pretty pleased with the results on that front and have also been using it poured on cereal, and for making desserts, pasta sauces and more. Anyway, lets get to the recipe:

1) Soak the oats in the water for 6-12 hours
2) Blend the oats and water and then strain. As mentioned in the last post a nut milk bag isn’t necessarily required as a fine mesh strainer (like a tea strainer) works quite well. What I do is quickly strain the mixture and then use a nut milk bag for what’s left.
3) Add the milk to a large pan, add all the other ingredients  (oil, lecithin, salt and sweetener) * and then blend with a stick blender until frothy and fully mixed.
4) Gently heat the milk until comes to a gentle boil then turn off the heat and allow to cool.
5) At this point you’ll find you have something closer to the consistency of single cream than milk and there may be some lumps or skin, you can blend once more if needs be.
6) If you require a thinner milk then add more water** (2-3 cups should be enough) and blend again, or store as is and then use it as a cream.

* the milk still works quite well without the oil and lecithin but I find it really adds to the consistency to use these things. Initially I used coconut oil but found the flavour too strong, sunflower however makes a milk that is versatile for a number of uses.

** thinning with other nut milks can also work well, I did a 50/50 mix with almond milk which was fantastic and coconut milk was also great (I used freshly made coconut milk made by my neighbour 🙂 )

I’d also like to share a couple of ways in which I use this milk. Firstly how I make my chai and then an idea for a dessert.

1) In a pestle and mortar smash the ginger and other spices (some additional spices that are used for chai masala  that you may like to try are black pepper, star anise and cinnamon)
2) Add the masala to a pan with the water and boil for a couple of minutes.
3) Add the jaggery and black tea and again bring to the boil
4) Add the oat milk and again bring to the boil, being careful to make sure it doesn’t boil over.
5) Strain in to cups and enjoy 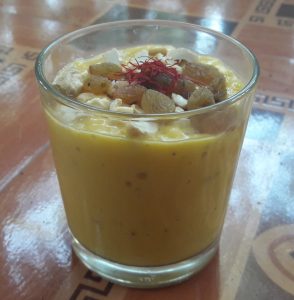 This mix also make a fantastic ice cream and works well different kinds of fruit too, papaya/cacao is a definite win 😉

This site uses Akismet to reduce spam. Learn how your comment data is processed.